There are 25 places in Harrison County which have been listed on the National Register of Historic Places since 1974, when the Harrison County Courthouse was listed.  The last was the Handy House on November 25, 2005.

That's more than forty years of work at identifying and in helping to preserve sites that are deserving of the recognition and protection!

The next time you are driving around Harrison County, see how many of the following sites you can see:
To find out more about these and other sites in Harrison County visit

or let your fingers do the walking over to

and look for the link to "History on the Hoof."

Do you think there is a site, a home, a building, or some other structure or something to be added to this list?  Then maybe you should contact the Harrison County Historical Society for more information.  It is a bit of work to get listed, but then the results are nothing less than HISTORIC!

IT'S DEJA VU ALL OVER AGAIN Shortly, some of you will receive five neatly-folded sheets of paper, sheets which have been carefully ... 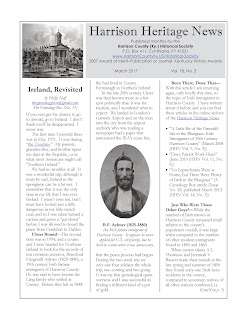